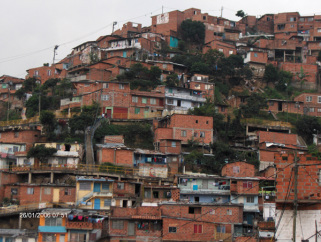 Comuna 13 hillside. Photo from www.a0n.com
Comprised of 19 neighborhoods, Comuna 13 is one of 16 wards in Medellin, and is located in the west central part of the city. In the 1980s, during the height of the Escobar regime and international drug trade, Comuna 13 was the most popular route through the Andes Mountains to the coast for arms, drugs, and contraband transit in and out of the city. The ward’s large boundary with rural farms also offered protection for the gangs and militia from the local authorities, permitting an increase of illegal trade in the city. During these same years, many fled the city to the hills causing overpopulation and unsustainable growth that led to a large gap in the provision of basic municipal services such as electricity, water, sewage, police and transportation leading to a low quality of life for the residents of Comuna 13.

In the early 2000s, under Mayor Sergio Fajardo, steps were taken to reform the ward, building equity through construction of Parque-Biblioteca (Park-Library) San Javier, a new school, public green spaces, and improved access to transportation through a new cable car line connecting the neighborhoods to the city, escalators and stairs. The ward reforms brought the benefits of increased access to public space, improved relationships between the residents and Medellin’s local government, and addressed critical issues of social inclusion. Comuna 13 has since seen increased employment and improved community life through community activities, access to education and information, and strengthened community culture (McNamara 2009). 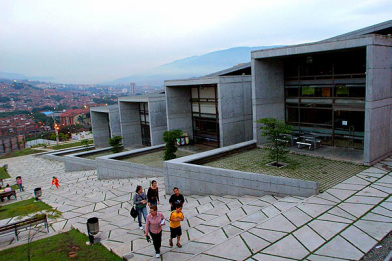 Parque Biblioteca San Javier. Photo from LA Times.
Parque Biblioteca San Javier opened in 2006 as the first of nine planned park-libraries at a cost of $4.5 million. McNamara states that Medellin's government defines park-libraries as “centers for coexistence that promote social inclusion and community participation within their reliable sites and with the necessary infrastructure to execute programs and projects that are aimed at science, culture, entertainment, diversion, new technologies, and mainly to promote respect towards other ideas and opinions".

The Park-Library is a physical structure designed by architect Javier Vera Londoño to serve as a symbol of investment in Comuna 13 to support the mission of reform through culture and education. It is part of a larger plan to bring physical, social, cultural, and educational improvements to the community. The Park-Library improves quality of life, as residents no longer fear to venture outside their homes and on the streets, strengthens community life and participation through community activities, improves access to information, and promotes community education. The Park-Library has recreation fields for soccer and basketball, a theater, community meeting rooms, meeting rooms for workshops and community skill development, a children's playroom, public areas (indoor and outdoor), and parks (McNamara 2009). 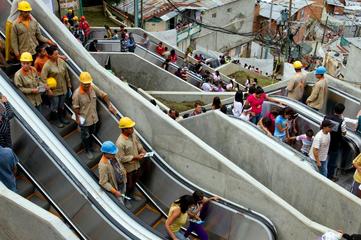 Escalators in Comuna 13. Photo from Medellin Buzz.
In Comuna 13, the city government made investments in transportation infrastructure to improve mobility of its residents within the neighborhoods and down to the city center. A Metrocable line was installed, Line J, that runs from San Javier up the hillsides. From San Javier, residents can commute by Line B, connecting them to the rest of the rail system. For the residents of Comuna 13 who commute to the city for work, this new line reduced their travel time by over one hour to less than ten minutes. Beyond reducing commute time for those already employed, it enhanced access to employment opportunities and helped to erode the boundary between the formal and informal employment sectors of the the city.

In addition to the Metrocable line, the city planned a series of public escalators to further improve mobility as well as security for the thousands of residents who live along the steep slopes of Comuna 13's neighborhoods. The escalator paths are integrated with green space and public terraces keeping with the importance of appearance and design for the neighborhoods.

Architect Jeff Geisinger, who investigates the built environment's impact on social capital traveled to Medellin in 2010 and 2011 and noted the following about the escalator design process:

"Forming committees of neighborhood parents and children during the design phase, the municipal architects communicated the benefits of the new transportation network and taught safe and respectful practices when riding. I attended a meeting in which a social coordinator, using design pamphlets made by the project’s architects, cultivated awareness and a sense of ownership with a group of neighborhood children to promote the sharing of knowledge and respect of the project to their peers. The community even participates in model-building workshops with the architects to raise excitement about the escalators and envision the positive changes to their neighborhood" (The Architectural League of New York). 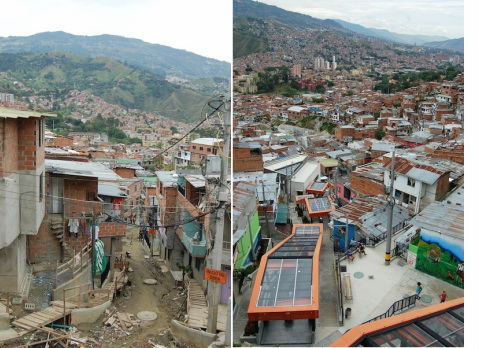 Before and after: escalators built. Photo from masteremergencyarchitecture.com
The physical infrastructure, community space, and transportation reforms in Comuna 13 have served three main objectives for the neighborhoods.

Use of public space
Park-Library San Javier provides cultural, recreational, and education spaces for the community, when there was previously a lack of space for community-building activities. San Javier offers programs in these spaces for all types of residents, strengthening community engagement and community awareness. Residents have access to computers and the internet at the Park-Library connecting them to the world in ways they could not before.

Additionally, San Javier serves as the station point for Line J of the Metrocable, thereby serving as a direct link to city access.

A healthy community is one that includes trusting those that administer services and funds to their neighborhoods. The state's implementation of these reforms improved the area and gained resident's approval because it sent a clear message that conflict and violence are being replaced by improved physical space, social investment, and job creation. Through this improved trust, residents are learning the values of equality and democracy.

Residents express satisfaction and gratitude at the new escalators Comuna 13